Hello everyone! Adana here. Happy Earth Day. I’m so excited because today is my birthday — it’s exactly one year today since my book ADANA THE EARTH DRAGON came out.

And to celebrate my author is making my story FREE for just one day on KINDLE. Click my cover to go to Amazon and pick up your copy.

Also check out my story in paperback or audio book. Or pick up the accompanying coloring and activity book.

But wait there’s more, for a limited time the Kindle copies of my author, Debbie Manber Kupfer’s other picture book titles are all on sale for between 99 cents and 1.99.

Click the covers below for more good reads for your little ones.

Hi everyone! We have a new family member. Meet Whiskey! She and Miri are slowly getting used to each other. I even caught them sniffing noses yesterday (though sadly I wasn’t quick enough to get a picture.)

Anyhoo, in honor of our new kitty I’m running a little contest over on my P.A.W.S. page on Facebook. Hop on over and leave a pic of your furry friend for a chance to win an audio book of my kitty story, Cecilia’s Tale, narrated by the ever-awesome, Fiona Thraille.

The tiny kitten mewed in the clutches of the evil Dogzilla the Dastardly. He had given up all hope of ever seeing his food bowl again.

But what was that? Flying through the air was Super Cici to the rescue. Faster than a speeding furball, she swooped down and scooped up the kitten from Dogzilla’s terrible jaws.

Yet another amazing rescue by the fabulous Super Cici.

Cecilia yawned. She opened her eyes and stretched. That had been an awesome dream, but now she was hungry.

Want to keep reading? You’re in luck, Cecilia’s Tale, story by Debbie Manber Kupfer with illustrations by Victoria Szulc is now available everywhere including Amazon, Nook, iTunes, Kobo and more, and for a limited time is just 99 cents/99p on ebook. Plus as a bonus if you pick up a copy today in either ebook or paperback and send me a confirmation number I’ll send you a code for a free audio book of the tale recorded by the awesome Fiona Thraille.

So it’s May and the April showers have turned into the May flowers and now as is traditional I get to reflect back on the crazy month of April when I challenge myself to blog from A to Z.

I started doing the challenge 5 years ago over at my sister blog, Paws 4 Puzzles. For three years I puzzled from A to Z. You can find my old puzzles over here if you’re curious and I’m working to release a book sometime in the future.

Last year I decided to switch it up a bit. I brought A to Z over to this blog and introduced you to a character a day from my P.A.W.S. Saga. Confession here – I actually changed a few names in Londinium (the book I was working on at the time) so that I could have one for each letter! You can check my A to Z of P.A.W.S. over here if you’re so inclined.

This year April was a special month. I had planned to release my new picture book, Adana the Earth Dragon on Earth Day (April 22) that fell right in the middle of the month. I’d been frequented several Children’s Book groups on Facebook and had been wowed by all the talent there was out there in the indie community. But sadly while most of these authors and illustrators produced fantastic books, it was hard to get the word out. So I thought how about in exchange for spreading the word about my little dragon I featured a picture book a day on my blog.

I created a form and was overwhelmed by the response, so much so that for most days in April I ended up featuring not one, but two or three books. I also had to get a little cheeky on some days. For example no one submitted a book that began with the letter V – but I did have two awesome books that featured mice, so V became the day of VERY small creatures!

I hope you enjoyed my posts and have discovered some new great indie picture books for your little ones.

Here’s a link to all the posts in case there are some you missed.

And just a little nudge ADANA THE EARTH DRAGON is on sale this week for just 99 cents/99p on Kindle.

Update – Everything should now be 99 cents! Happy Reading!

Hi folks, I’ve got a surprise for you – starting today for one week only all four of my picture books are just 99 cents/99p on Kindle.

That includes (from left to right)

The Great Bobbert has lost his weasel again. Where can that pesky Popgoes be?

Adana is a small, brown, earth dragon. She longs to play with the other dragons, but none of them will accept her as a friend. One day a giant wanders into the land of the dragons and scares all the other dragons.
Can Adana save the day and prove that even a small brown earth dragon can do big things?

Cecilia’s on a mission to find a new human, but will she find the right one? She’s heard they’re very difficult to train.

Pick up one, two, or all three for your little ones!

And now we reach the final letter of the alphabet, the letter Z. 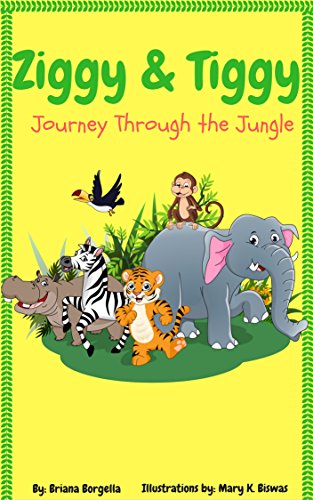 Take an adventurous journey through the jungle with Ziggy & Tiggy!

Available from Amazon in paperback or Kindle.

So you’d like to see some cool JUNGLE animals but can’t make it all the way to the jungle. How about a trip to the ZOO instead?

So climb aboard the ZOO TRAIN, an animal counting book by Tim Steiner.

Count with Claire at the Zoo! Introduce your young reader to animals, counting, and how to politely accept and decline invitations. For ages 1-3.

Available in Kindle or paperback.

So there we have it we’ve traveled the alphabet from A to Z. I hope you’ve had fun and picked up some new reads for your little ones.

P.S. If you haven’t picked up my book yet – please do! Available in Kindle, paperback or audible or directly from Debbie on this website.

Adana here and we’re nearly at the end of the alphabet – Can you believe it? The last post will appear on Monday.

Today though we focus on the letter Y.

First up we have MY YUMMY CORN written and illustrated by  Surendhra Kumar Padayatchi.

This is a story about a mouse that lived a content life in a corn field being usurped by a city dwelling mouse to enjoy the fruits of an urban living. Did the mouse settle down in the city? What happened after the mouse departed with his new acquaintance?

Pick up your copy in Kindle or paperback today.

Secondly, I’m going to cheat a little. I’d like to introduce you all to YURI SHAMNE. Yuri is an artist and puzzle maker from Russia and he has been providing picture puzzles for Debbie’s puzzle blog, Paws 4 Puzzles, on Wednesdays.

You and children can catch up on all of Yuri’s puzzles so far on this page. I promise you won’t be disappointed.

That’s all for today. Join me on Monday for the letter Z!

Adana here. We’re going to cheat a little today. Debbie couldn’t find any books that began with the letter X so instead she told me to introduce a couple of X-tras.

First up is an awesome book that Debbie edited, AND THAT’S WHY SHE’S MY MAMA written and illustrated by Tiarra Nazario.

What is a Mama? A mama is someone who is always there for you. She makes you your favorite food, takes you to the park, and kisses your boo-boos better. Some mamas didn’t hold you in their belly, but they will forever hold you in their hearts. Mamas come in all different shapes, colors, and ages, but they all have one thing in common.

Pick up a paperback copy directly from Tiarra’s website.

Next up is a little story from Debbie Manber Kupfer from the world of P.A.W.S.

The Great Bobbert has lost his weasel again.

Where can that pesky Popgoes be?
Find out in this humorous tale available on Amazon in Kindle or paperback.

Come back tomorrow when we celebrate the letter Y with some Yummy corn and some puzzles from Russian artist and puzzler Yuri Shamne.

A children’s book inspiring the next generation of feminists, Women Who March is an illustrated depiction of the author’s experience participating in the 2017 Women’s March. Written to spark conversation between parents and children, the book describes the march and the equal rights activism that fueled the marches around the world.

Available on Amazon in Kindle and paperback.

Next up is a book that deals with another serious subject and one that is dear to the heart of this little brown dragon, as I do have a tendency to worry.

Meet young Maya in When Worry Takes Hold by Liz Hazke and illustrated by  InSong Nam.

One night just before the lights went out, Worry snuck into Maya’s mind. Worry grew bigger and bigger until there was no space left for anything else. Just darkness and fear. Join Maya as she finds Courage, through the form of a calming breath, and learns how to break free from Worry’s hold.

Pick up your copy on Amazon in Hardback, Paperback or Kindle.

That’s all for now – we’ll have something Xtra special for you tomorrow.

Adana here! Debbie informs me that today’s theme is VERY small creatures – that is to say we are going to meet two little mice.

The first is Mario: the Mouse who loved Spaghetti. I’m not really sure what spaghetti is (we don’t have it in Dragon Land), but it sounds yummy! Anyhow you can read about Mario in this book by John Geraci, illustrated by Shelby Lynne.

Pick up this story of a cute mouse named Mario whose love for spaghetti gets him straight into trouble on Amazon in Kindle or paperback.

Next let’s meet another Very small rodent, the Mouse from Laos from the book by Bianca Ksoll and illustrated by Cristina Szemere Enderlin.

Meet this little mouse in a special book from Moonjami Press, an independent children’s book publisher founded by a mom and human rights advocate.

From the author of The Mouse from Laos – “Reach for the stars. Look under every stone and remember to READ, READ, READ.”

Pick up your copy of The Mouse from Laos directly from Moonjami Press.

Well that’s all for today. See you tomorrow,