I was born in Texas but grew up in Colorado. I have written for small-town newspapers for 20-plus years and held jobs in Rocky Ford, Colo., Raton, N.M., and Duncan, Okla., before settling into my current job in Kingman, Kan. Along with newspaper writing and novel writing, I write for the Denver Broncos website, Mile High Huddle and do other creative writing in my spare time – as you can tell, I love writing! Other than that, I volunteer at the Kingman County Humane Society, collect (American) football cards and do a lot of reading. I’m also a comic book geek and my fandom there includes the Arrowverse shows on the CW Network, the Marvel Cinematic Universe and a bunch of graphic novels.

Regarding writing novels, I first started with an idea that popped into my head a few years back for a group of teenage superheroes, but was lacking a premise for how they came together. The idea came from watching the TV series, Young Justice. As I mulled over my idea, I ran across The Hunger Games series and loved it. That’s when I asked myself the question, “What if a group of teenage superheroes emerged in a dystopian world?” And that’s what led to the inspiration for The Six Pack Series.

I started writing the first draft of the first book back in the spring of 2015. From there, I came across the Kansas Writers Association and got useful tips about writing and editing. I read a couple of books about writing from there, did more research, got feedback on my drafts and it took off from there. 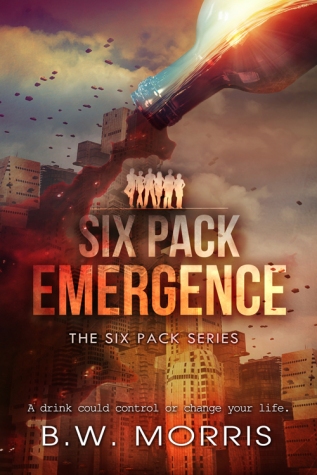 What usually inspires me are current events or topics and how they could be twisted into a unique story. Also, some TV shows have inspired me to think about what they might look like if there was a different twist to them. And I do get inspiration for characters from people I have met in real life.

Six Pack: Gyration is the second book in The Six Pack Series. It follows up on the events in the first book, in which our group of teenage superheroes is adjusting to a new life, but Tyler Ward, the main character, is worried for the safety of the people they left behind. When he learns that his professor from secondary school is in trouble, he encourages his friends to rescue him – but his decision has bigger consequences than he realizes. 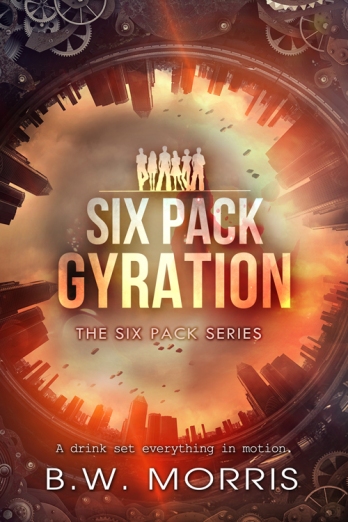 Sci-fi allows you to explore different possibilities for what worlds may look like, how technology could advance and how people may interact with one another. It lets you use your imagination to think about what could be. Though some research is necessary, you don’t have to be as exact as with, say, historical fiction. The ability to think of your own ideas, so long as you keep them grounded in the worlds you build, gives you a chance to be more creative.

Also, I have an overactive imagination, so sci-fi is the best way to use that to my advantage!

I am completing the third novel in The Six Pack Series – it’s going through beta reading and final edits. I hope to have it released next year. I’m also doing a creative writing project on my blog called the Arrowverse, “Other World” in which I look at alternative versions of the characters in the four CW series. I have other novel ideas in mind, but just need to decide which one to pursue next! (This is what happens when you have an overactive imagination!)

I’m either reading or watching DVDs. And volunteering at the humane society is another way to relax – what could be better than spending some time with dogs, walking them, feeding them and caring for them.

I also like to hang out with my parents dog, Ginger. She’s a good friend of mine.

Oh, that’s a good question! I think I would go with mental telepathy, because I can imagine the possibilities that would bring. No more guessing whether or not a politician is being honest with you!

Seriously, the possibilities with mental telepathy could go beyond mind reading. I think it would be interesting to see how far that power could go.

They may find me on Facebook at www.facebook.com/bwmorrisauthor. I’m on Twitter at twitter.com/sixpackwriter. I am currently building a new website at bwmorrisauthor.com. I hope to get that website launched in June to kick off a launch party for my newest novel. Until that website is launched, readers may visit my current blog at relaxingwithsixpack.blogspot.com. They may also contact me at bwmorris at mail dot com. And I am working to get a newsletter and mailing list started.

It all started with a drink – a drink that gave Tyler Ward and five of his friends superpowers. Now they must figure out how their new powers can change society.

But who can they trust?

Who has their best interests in mind and who has a bigger agenda?

And what cost comes with change?

Just weeks before Tyler Ward is to graduate from secondary school, he learns the truth about Novusordo and how a drink controls the population. After sharing this information with his five friends, they visit a professor’s house, take another drink and gain strange powers. It leads to them learning more about how the government controls people and the discovery of a movement against the government. Calling themselves the Six Pack, Tyler and his friends must learn how their powers can change society. But they first must learn to trust this movement… and even each other.

Months after the Six Pack has fled City 37N104W, Tyler Ward wonders how much longer the Underground Network can afford to wait to make its next move against the Novusordo government. The disappearance of five more students from Monroe Secondary School pushes his desire to take action. And when he learns that Professor Roger Woods may be in trouble, he is convinced he and the Six Pack must take matters into their own hands, even if it means defying the Network. But actions have consequences, and the decisions Tyler and his friends make will impact everyone they encounter — including themselves.

In editing stages, targeted release in 2019. More info to be announced.