So today’s the day. The day when the world was supposed to end and didn’t. So what happened next? Where did Susie and Sasha go after the world didn’t end?

Another Slice of Watermelon

A few hours later we’re out on the street pushing through the hordes of people. I’d convinced Sasha that we needed to get out of the city for a while. Told him I figured the landlord would be after us for rent, now that the world hadn’t ended. I hadn’t told him my real reason for wanting to leave, that I needed to check that the outside world still existed. He would have laughed at me, thought I was being ridiculous . . .

We made our way down Jaffa road, weaving through the multitudes, the soldiers, the black hats, the beggars. There were many, many people in the street, but while there are still a few cars, most were on foot. There had not been much petrol for months now. We passed the bus station. There were just a few buses running and the crowds were pushing and shoving to get on board. Sasha and I didn’t have any money for the bus in any case. We walked on past the bus station and out of the city.

There was a junction there which we knew from many of years of experience was the best place to hitch a ride out of Jerusalem. There were a few soldiers standing there with us and we knew already that any cars that stop would take the soldiers first.

Still we had one advantage over the soldiers. We had nowhere in particular that we needed to go.

Out in the streets of Tira there was total silence. No one had emerged from their houses at all today. Nahram sat on the stone wall outside her house. So it was still here – the world – she knew it would be despite everything her family and friends told her. Despite what they had told her at school. Despite what she’d seen on the TV screens, those hysteric voices from Al Jazeer blaming Israel and the Jews for all their troubles.

She had kept going to school even when most of her friends had stopped. Yesterday there had only been her and her teacher.

Nahram was going to be a doctor – there would need those even more now. Now the world was still here. She wondered how long the rest of the village would sleep. When they would wake up and realize there were all still here.

She looked down the street – a girl and a boy were walking towards her wearing shorts and T-shirts. Where had they come from? There had been no visitors to the village for months now.

We waited at that junction for nearly two hours, watching all the soldiers disappear into vehicles. We had almost given up when a small truck stopped and asked where we wanted to go. We said we didn’t care; wherever they were going was fine.

The guy driving the truck, Hamid, was trying to get back to his village. There was very little petrol left in the truck so this was unlikely. Still, he said, if Allah had saved the earth, surely another little miracle would be in order and maybe they’d find a petrol station along the way that still had petrol.

Many years before, I had spent a year volunteering in the Arab village of Tira. I had been young and idealistic then, believed I could change the world – didn’t realize that the world was not willing to change. It had been years since I’d been back to Tira, yet today a few hours after the end of the world we found ourselves on the outskirts of Tira. Hamid’s truck had broken down several hours before and we were on foot unable to find another ride.

As we walked into Tira I recognized the houses – it seemed like nothing had changed, yet it was eerily quiet. Where were all the people? I had friends in the village, or at least I used to, but I felt suddenly shy, unwilling to knock on a door, though we desperately needed water. I’d almost decided it was hopeless and was going to leave again when I saw the young girl in the distance sitting on the stone wall. Was she the only one left?

As we walked closer – she rose to meet us, smiling, 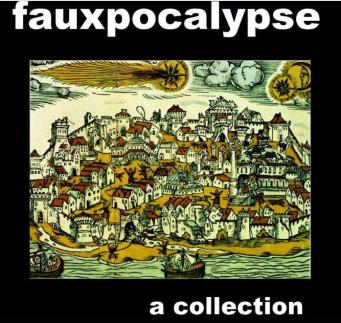 Pick up your copies today and join the event on Facebook!